Get Alerted as soon as a "M "or "W" appears on your charts !

The advantage of such indicator is that it's doing all the hard work for you. It scans many pairs as you want for 4 different timeframes (M30 to Daily).
Let's say 28 crosses, so it checks in realtime (28*4) 112 charts 24 hours 5 days a week. Would do the tedious work on your own? Just get alerted when it's about to happen.

The Indicator doesn't repaint and once attached to the chart it displays previous patterns:
- All charts are almost 1 month trading: Most of the signals worked !

M&W Pattern Indi is embedded with CSA (Currency Strength Analyser)
This tool indicates which currency is the strongest (top of the dasboard) and which currency is the weakest (bottom of the dashboard)
This tool is used to filter signals... in some conditions, we reverse original signal. For example we sell on M and sometimes we buy on W.
Refer to this post to see examples [ Here ]

By default, Indicator will not alert for patterns on M30 & H1 as parameters are set to false.
"Alert_M30" & "Alert_H1" can be set to true. I simply do not recommend to take into accounts these calls if an high impact news has been released 20 mins ago.


Introduction to the Pattern

Find out on Indonesian Forum [ here ] provided by [ cevsmile ] 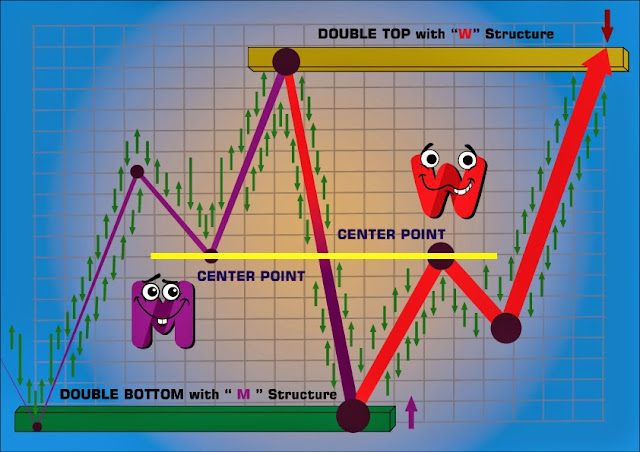 Market leaves a structure price behing itself. A repetitive structure price is also called "Pattern" and it can be a very strong signal of imminent trend such as Head & Shoulder, Harmonics... My Pattern is like a subliminal message left on your chart chart. Keep in mind that if there is no major reason (fundamental) to keep market under pressure, then market rises, especially after a "M". The opposite Pattern looks like a "W" 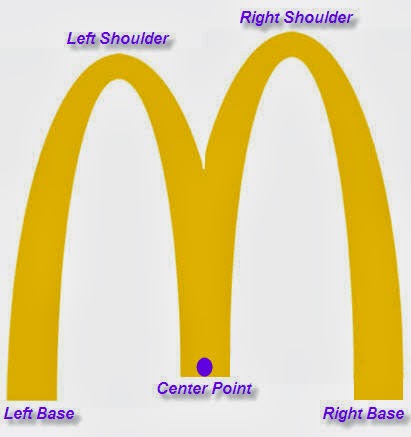 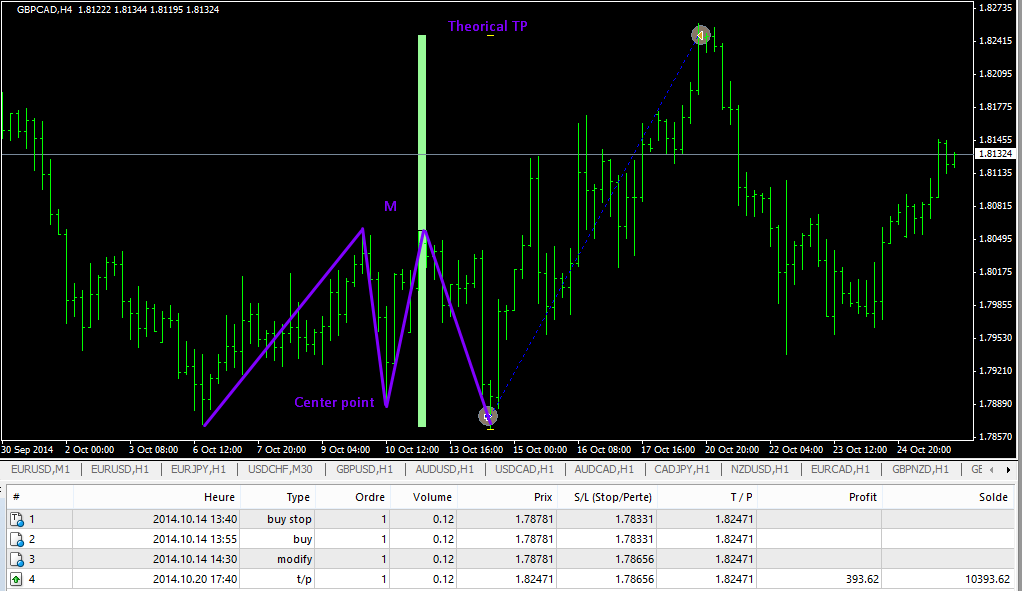 4) How to check if a M Pattern is going to be successful?

Market can't break and close above Center Point. This level is a resistance and market is rejected twice. Therefore we can reverse the trade as we suspect strong down trend.

5) How to filter those Patterns?

We had just a little retracement until Center Point.

Obviously on higher Timefame, those patterns doesn't occur very often, but when they do, Risk/Reward is absolutely fantastic: + 5500 pips from signal given by M Pattern.

Last time I warned in realtime for M Pattern 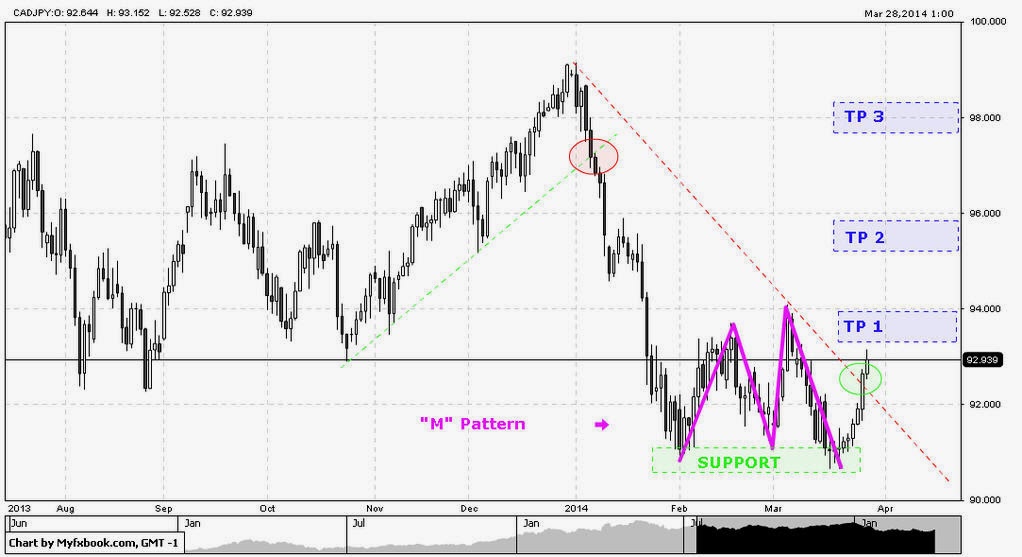 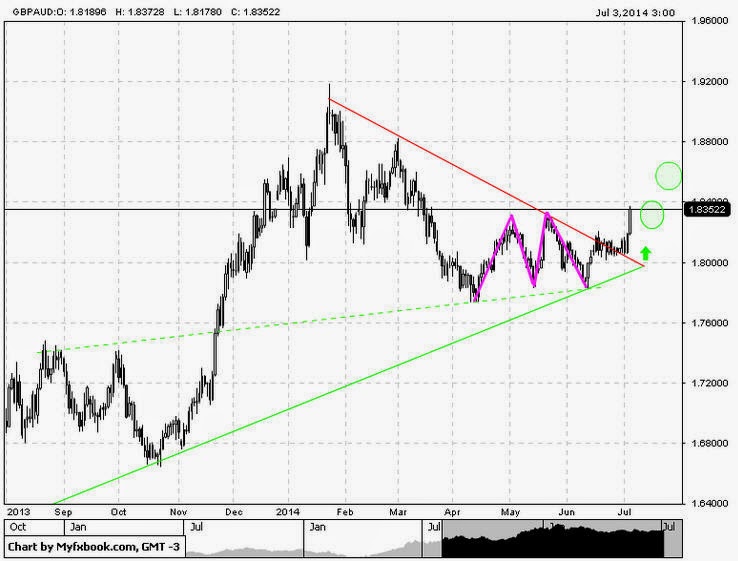 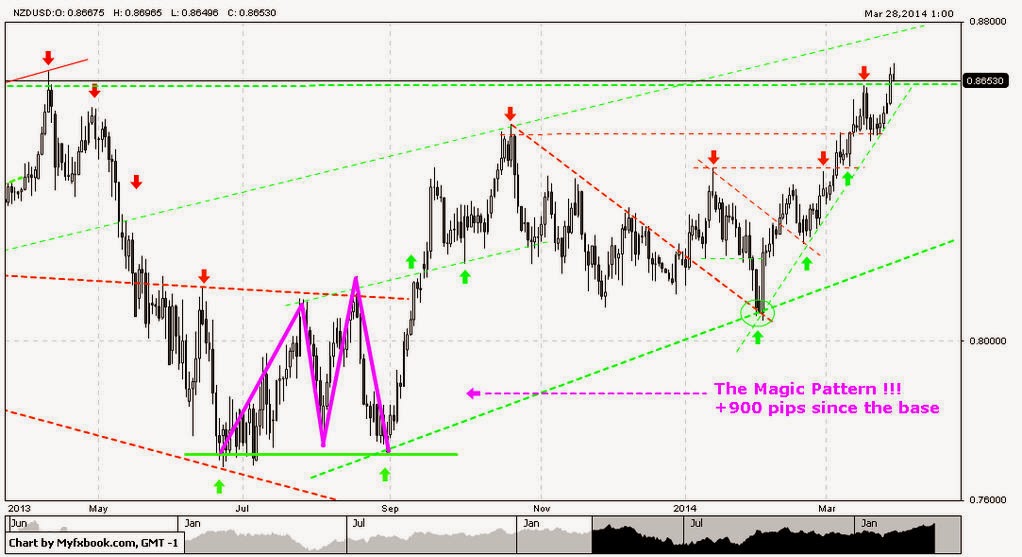 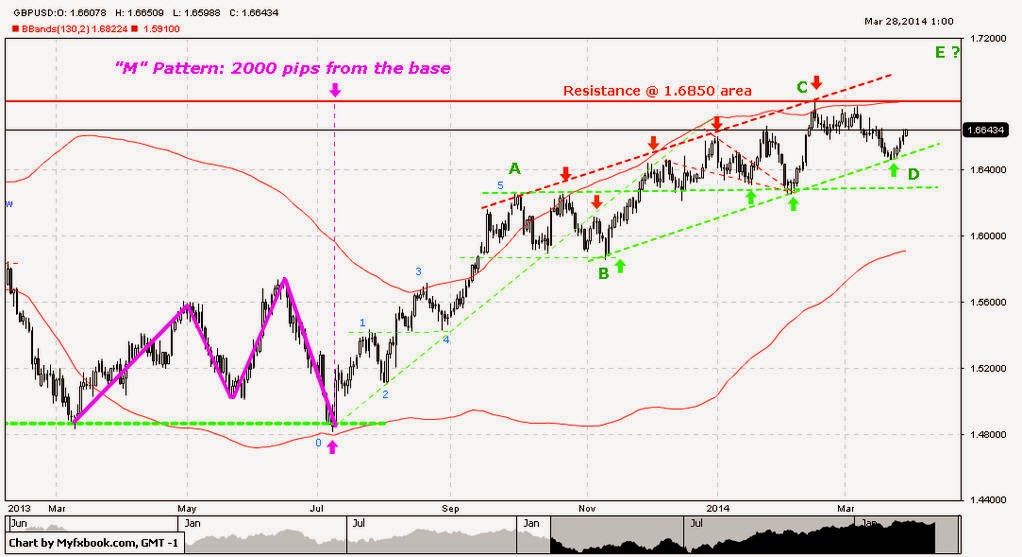 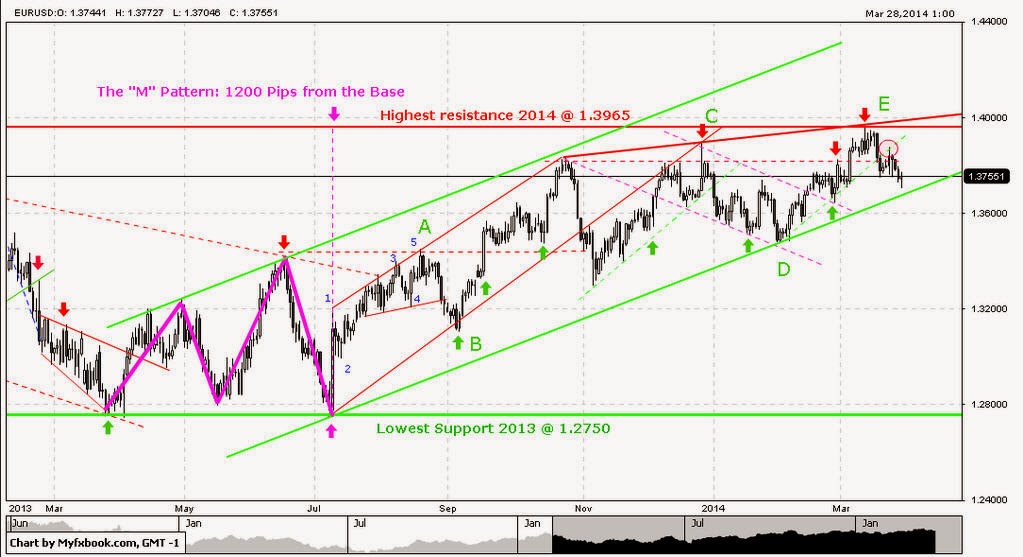 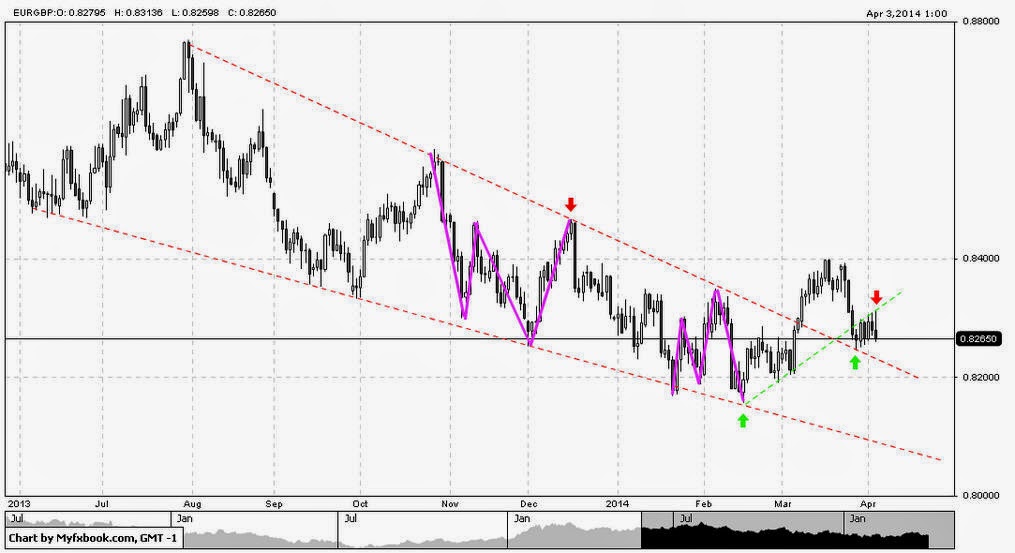 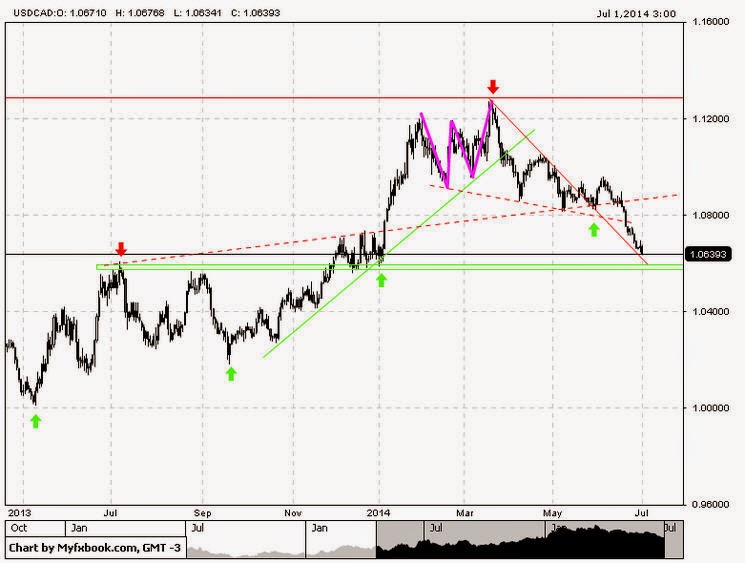 My Pattern VS Harmonics 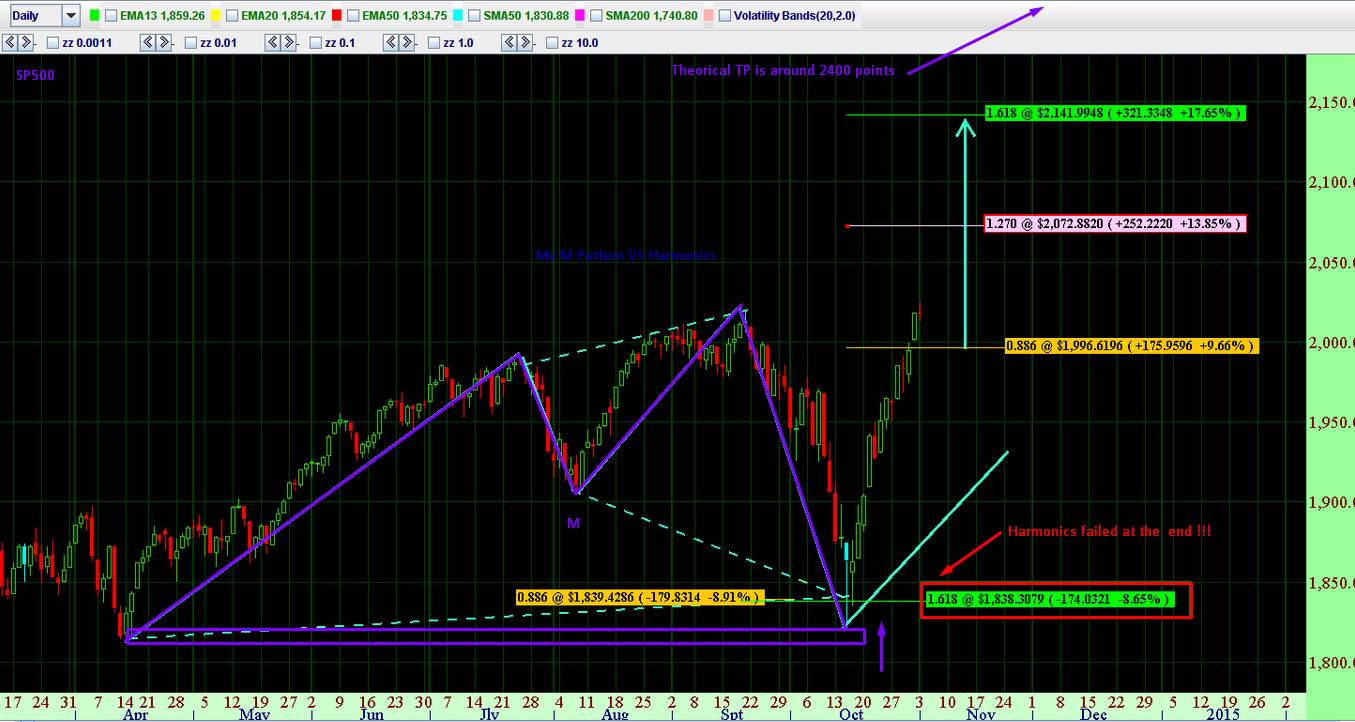 Posted by CrazyTrader at 6:26 AM